[News Straits Times] The Ugly Side of Beauty Industry 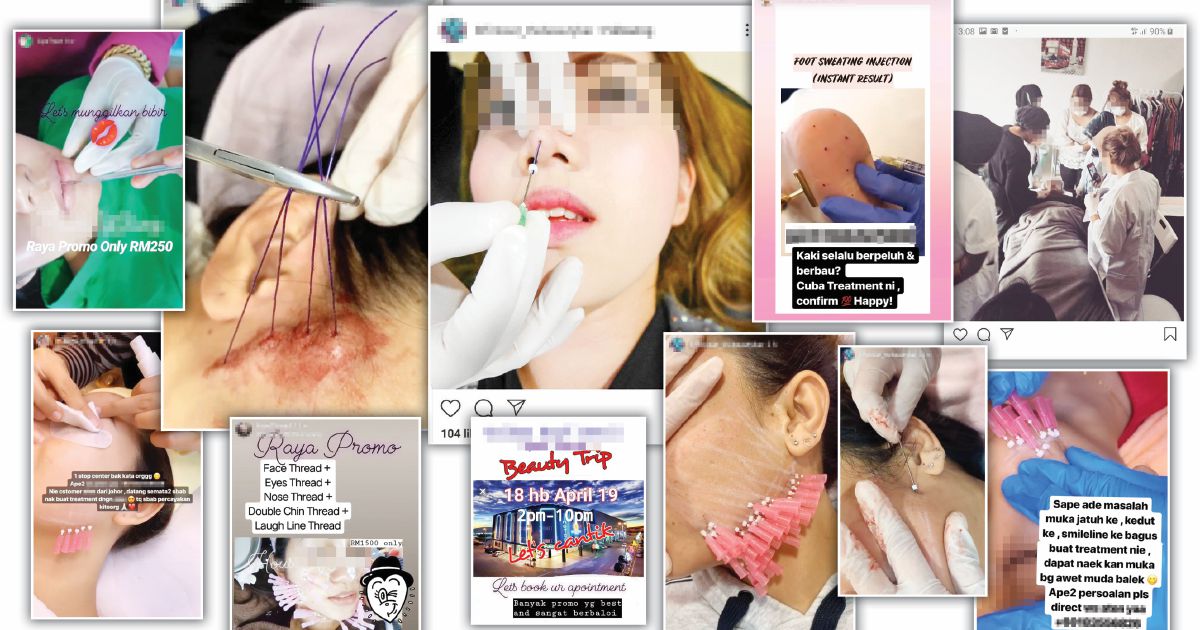 KUALA LUMPUR: THE desire to be seen as beautiful and flawless has been raised to another level, with social media acting as real-life exhibition for the world to judge and exert influence on its users.

As people strive to make themselves more attractive to their online followers, businesses are taking advantage of this obsession, going beyond legal means and risking customers’ safety to make a fast buck.

Beauty centres, wellness spas and massage parlours have upgraded their skill sets from offering basic services to something more intrusive: treatments and procedures that can be done only by medical personnel.

Dubbing themselves “medispas” (medical spas) or beauty clinics, many of these facilities are uncertified.

Although some medispas and beauty clinics are certified by the ministry and managed by qualified practitioners, they are outnumbered by unregistered ones, as well as those run by self-proclaimed “doctors”.

Those from the medical fraternity, especially plastic surgeons, have urged the Health Ministry to ramp up enforcement and clamp down on these businesses.

This, however, is easier said than done. Health Ministry officials said there is a gray area when it comes to such beauty facilities as they are not medical facilities.

Thus, they do not fall under the ministry’s purview, especially on enforcement.

“The beauty centres, medispas and such are not medical facilities, but carry out procedures using medical devices and issue medical subscriptions.

“They are neither hospitals nor health clinics. They are businesses. The ministry handles medical facilities, not the beauty business. Businesses do not come under our jurisdiction, but the Domestic Trade and Consumer Affairs Ministry,” said a Health Ministry source.

Apart from physical shops, there has also been a surge in home-call services and national tours by self-proclaimed beauty experts.

Home-call services involve visits to customers’ houses for the procedures. National tours see practitioners go from city to city to conduct the procedures in hotel rooms.

This modus operandi makes it harder for the authorities to track them down. They also rarely leave evidence.

Health Ministry sources said these procedures had left many victims either temporarily or permanently disfigured, and had also resulted in deaths.

Health Ministry regulations state that any medical device used by anyone, whether or not he possesses a medical background, must be regulated and certified under the Medical Device Act 2012, while any type of medicine given out has to be registered with the National Pharmaceutical Regulatory Agency.

Although these two details come under the Health Ministry, the business itself does not.

The source said divisions from the Health and Domestic Trade and Consumer Affairs ministries have sat down a number of times in recent years to address the gray area, but had failed to come to any solution.

As the debate continues over whose responsibility the issue falls under, rogue beauty facilities have continued to mushroom, providing services such as whitening drips, dermal filler injections and thread lifts. Some even provide plastic surgery procedures, such as liposuction, and double eyelid surgeries.

A check by the New Straits Times with the Domestic Trade and Consumer Affairs Ministry confirmed this.

Our request to speak to the person or team in charge of this business segment was met with: “This comes under the Health Ministry.”

The Health Ministry source, after being informed of this reply, said: “Does this mean our health enforcement officials can raid convenience stores and supermarkets?”

Since 2016, eight premises, beauty salons and spas have been charged and fined for carrying out aesthetic medical practices under Section 4(1) of the Private Healthcare Facilities and Services Act 1998 (Act 586).

It was found that these premises operated as unregistered private medical clinics offering aesthetic medical procedures that could be done only by registered medical practitioners with the Malaysian Medical Council at registered and licensed private health facilities.

Investigations into Raisya Medispa in Terengganu also began that same year. It was found guilty on June 17 and fined RM100,000.

An official from the Health Ministry’s enforcement division told the NST that it was investigating three premises, two in Johor and another in Penang.

The official said the ministry had no power to enter beauty parlours unless they were suspected of providing or carrying out medical treatments, which then gives the ministry the right to enter and if proven true, charge them under Subection 4 (1) of Act 586.